In the following five contributions, we will explain the differences between humic substances, charcoal and clay minerals, which are often equated by their appearance. Parts 1, 2 and 3 have already described the development, extraction and modes of action of these substances. In this fourth part we will discuss their results in scientific studies.

Several studies have already been carried out about charcoal in pig and broiler feeding (CHU et al., 2013, JIYA et al., 2014, KANA et al., 2001, SUNG et al., 2006). The results were partly contradictory. Significant increases in performance have been occasionally made out. Often, however, no difference was noted. The comparability of the studies is difficult, as the charcoal used and the dosages differ.

The product WH67® has been researched for more than 50 years and since then has been continuously developed and optimized. Numerous studies prove the effectiveness on the basis and practice level. A study by GERLACH et al. (2014), for example, shows that the use of WH67® has significantly better effects on minimizing C. botulinum than charcoal (see figure 1). BARTHMANN (2002) and LEIDEL (2016) showed significant increases in milk yield and positive effects on the health of dairy cows. The investigation by LÜTKE-DÖRHOFF et al. (2017) shows that the feed addition of WH67® can significantly increase daily gains and feed intake in high-performing piglets in a good health status. Please find more information about this study here: https://www.gites-gmbh.de/en/publication-humic-acids-in-animal-feed/ 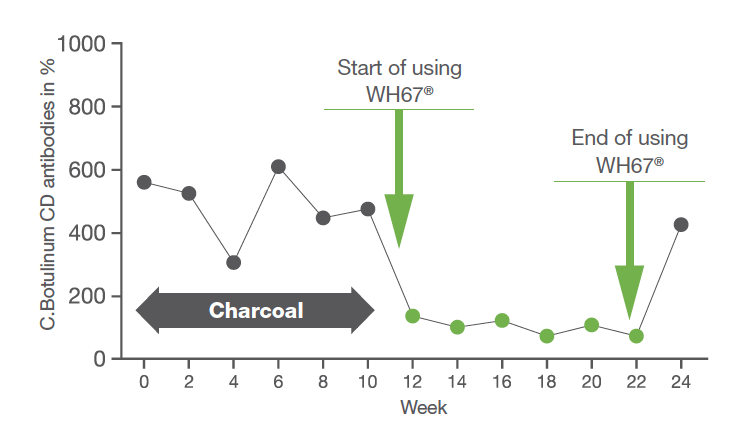 Scientific studies show that the use of humic substances, clay minerals and charcoal in animal nutrition can have positive and occasionally also negative effects on various parameters. However, the results are not always comparable and sometimes contradictory. It comes out that the success of a product depends very much on its standardization and quality. If this does not happen, even negative effects can occur. Our product WH67® is a fully standardized product that has been researched and developed for more than 50 years and has been proven to increase animal performance and vitality.